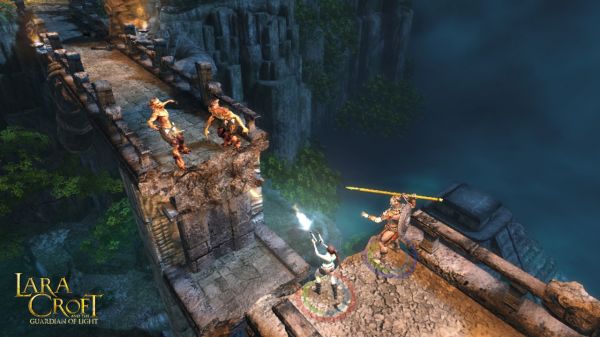 Square-Enix and Crystal Dynamics have unveiled the next Tomb Raider title, and it isn't an Tomb Raider at all.  Called Lara Croft and the Guardian of Light, the game ditches Tomb Raider's traditional 3rd person adventure elements in favor of a more arcade like isometric shooter experience.

The good news for this title is the addition of co-op play, with one player controlling Lara and the other controlling Totec, a Mayan tribesmen.  Each character has their own unique weapons and abilities which play into the gameplay.

Each playable character has unique weapons and skills for maneuvering through those Central American jungle ruins. Lara's got her iconic dual handguns (which, befitting of the retro style, have infinite ammo), and Totec hurls deadly spears. But these weapons aren't used purely for combat. For example, the spear works both against enemies and as a tool for traversing past obstacles: Totec can throw a spear into a wall to allow Lara to get up to an otherwise unreachable ledge. Lara, on the other hand, has a grapple hook to make it across seemingly impossible gaps, and Totec often must place his life in her hands with assisted jumps. Other co-op tricks include Lara's ability to jump on top of Totec's shield when he holds it above his head and Totec's tightrope walk across a gap using Lara's grapple rope.

The game will also have co-op puzzles like those mentioned above and more.  While there is still some puzzle elements, Lara Croft and the Guardian of Light is all about high scores and replayability.  Expect lots of scoring overlays in traditional arcade fashion with competitive leaderboards for the best co-op duo.

The game is playable both online and offline with an expected release this summer on undisclosed digital platforms.  We're venturing we'll see a PSN, XBLA, and PC version.