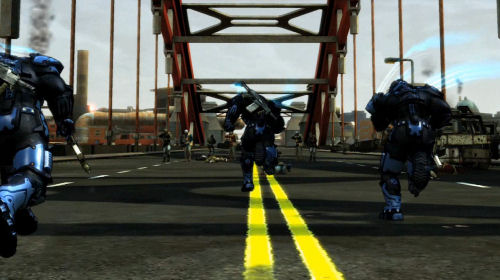 As if you didn't already know, Crackdown - and its sequel - is fun with friends.  If you need the proof, perhaps the first video documentary for Crackdown 2, aptly titled Fun with Friends will set the record straight.

In it many of the Ruffian Games team describe their design decisions to create a solid experience for the game's four player co-op campaign mode.  It's obvious the team thought about cooperative play from Day 1, and we couldn't be happier to hear that.

We even get to hear about a new orb in the game, designed exclusively for co-op.  From the sound of it, it'll require two players to "corner" it as it runs away when you try to get it.  Another improvement unveiled in the video is true drop-in/drop-out play.  While the first game did allow a friend to join at any time, it did reset you back to a supply point, something is sounds like Crackdown 2 will remedy.