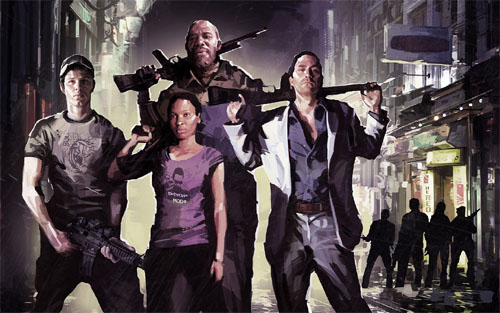 We told you earlier this week that Valve would be releasing a comic via xbox Live connecting the events of Left 4 Dead, Left 4 Dead 2, and Left 4 Dead 2's upcoming DLC entitled "The Passing." We weren't very clear, however, what exactly the comic would cover. Now, after getting a surprising look into a major plot point of the Passing, we know. For those who don't mind knowing a spoiler, of sorts, about the events of the Passing, read on.

The Passing received a tagline today: "Nobody Survives Forever," and the plot of the DLC will demonstrate just that point because one of the survivors will not be, er, surviving anymore. All four of the original survivors from Left 4 Dead (Bill, Francis, Zoey, and Louis) will make their entrance at the start of the Passing, joining Left 4 Dead 2's survivors Ellis, Coach, Nick, and Rochelle; however, one of the original survivors will not be making it to the end. It hasn't been announced, however, which one will be taking the final dirt-nap for the good of the team.

The release of the Passing for the second game will be followed by DLC for the first Left 4 Dead where the original survivors will play through the events that culminate in the death of one of them. Apparently in this DLC the players themselves will get to decide which survivor will make the sacrifice. The comic released on XBL (which will be released between the two DLCs)  will be Valve's version of this story.

Who do you think Valve will choose to make the absolute sacrifice?