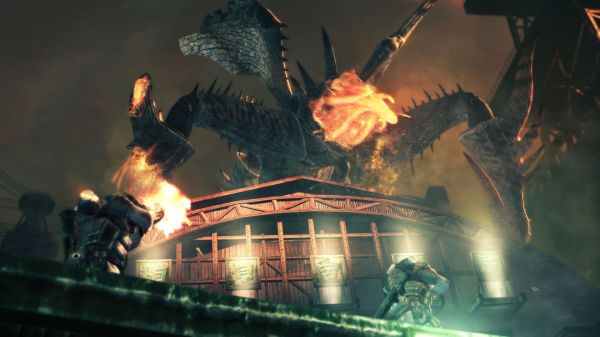 In much of the coverage of Lost Planet 2 to date, we've seen a lot of two things: aliens and Marcus Fenix.  Perhaps realizing that their co-op third-person shooter, while certainly enjoyable to look at, may get painted with a "much of the same" brush, Capcom recently visited 1Up's offices to show off an exclusive level from the upcoming title.  With a tagline of "Lost Planet 2 Is More Than Just Shooting Through An Alien's Anus," the preview lives up to its tagline and doesn't disappoint in providing something other than another giant alien.  In fact, it offers up something that I know at least one of our editors will be happy to see: giant fighting mechs.

Before diving into the action, the preview sets up a little more of the story behind Lost Planet 2.  Rather than humans attempting to make a settlement on a hostile planet, Lost Planet 2 instead focuses on a war between the Neo-Venus Construction (NEVEC) army from the first game, and a rag-tag fugitive fighting group comprised of ex-NEVEC soldiers, pirates, and raiders.  These two factions are battling for control of the limited amount of "T-energy," the game's "unobtanium," if you will, that's located on the planet.  Throughout the course of the campaign, players will jump back and forth between the warring factions, getting a different perspective on the war, and fighting off more than just aliens with a complex.

The first of the two preview videos shows some of this human v. human action as a group of players (some controlled by humans, some controlled by A.I.) assault some kind of military base with the help of an armored mechanical suit.

The second video shows the same group of players now defending the base they just assaulted from enemy troops, helicopters, and, yep, some of the same armored mechanical suits that you used to take the base in the first place.  In this video, however, the lead player uses a mechanical suit that seems to be modelled after the exosuit cargo-loader from "Aliens" (sans the yellow-frame and flame thrower, sadly).

It's certainly nice to see a little more enemy and action variety tossed into the game's mix, though the "two sides duking it out for this rare material" story certainly has me a bit weary.  Hopefully, the gameplay and co-op is satisfying enough that the plot, in a worst case scenario, can just be an adequate vehicle between the next epic boss fight or giant mech battle.