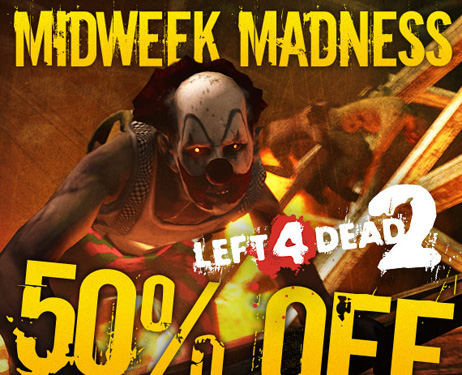 Valve has currently slashed the price of the Steam version of Left 4 Dead 2 fifty percent, making the cost to you just $25.  Even the four pack of the game, which is normally $150, is half off, making each copy cost you just $18.75.   Xbox 360 owners, you aren't left out to die though paying full price, Amazon currently has the game on sale for $36.  Both sales end tomorrow though.

The most interesting thing regarding the sale comes from the promotional post on the Left 4 Dead blog.  After listing off some of the sequels new features, it mentions the Passing DLC which is set for a spring release.  You've already read the shocking revelation, but it appears to be a bit deeper than we once thought.   Be warned, spoilers are ahead.

So it appears that one of our favorite survivors from Left 4 Dead 1 is not only dead...but undead.  Could we see a possible boss battle like fight with Zombie Bill?  Could Undead Louis try to sell us drugs?  Perhaps Evil Zoe will try to seduce us with her backpack?  Or maybe Francis will simply say - "I hate being dead."

Whatever happens it's sure to be a great co-op moment in the game to hear everyone's reaction when that fallen survivor is unveiled.

It's also good to see the game is getting new game modes, of which we hope at least one is a new co-op mode.  Remember Left 4 Dead  got the co-op survival mode as a free piece of content - could Valve has something up its sleeve for the sequel?

We'll find out soon enough when the content hits soon.