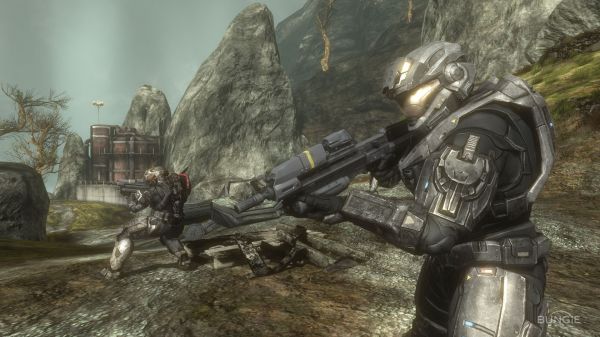 As if Bungie wasn't already upping the ante with Halo: Reach by finally including matchmaking support for this, presumably the last, entry in the beloved Halo franchise.  G4's Patrick Klepek spoke with the system's designer, former journalist Luke Smith, about the new feature, including what the system is and what players can expect from it.

Bungie assures gamers that they will be utterly rewarded in Halo: Reach, able to customize their characters to bring a unique "them" to Halo as well as matchmaking based around commitment to the Halo name. What that means to gamers? Their time in the Halo universe will contribute to customized armor for a unique look, and all those hours practicing your jumpshot on grunts will go toward your matchmaking. G4 games gets the online scoop:

"Bungie has detached Halo 3's ranking from the Trueskill system that drives matchmaking. Previously, the on-screen ranking users saw reflected how players would be matched up competitively, meaning someone with a high ranking would most likely be a competent Halo 3 player. That's not necessarily true in Halo: Reach. To be clear, Trueskill is still driving matchmaking, but Player Investment is more reflective of the amount of time someone's dedicated to Halo: Reach and not necessarily their skillset. Someone can have a high Player Investment ranking and be a terrible player. But since Trueskill is tracking that data in the background, away from users, it will still match players appropriately. So, don't worry: terrible Halo: Reach players will be matched with other equally-awful Halo: Reach players."


As players complete quests or even versus matches they earn credits (called "cR" in the game) to apply to purchasing armor in the game. The credits will be doled out based on actions in the game. For instance, phenomenal headshots will be rewarded with cR. The amount of cR you earn will directly reflect your mad skills - though, the armor sets are purely aesthetic with no real functional benefit. But, you'll look really cool (and when you do look really cool, you should start a thread on this site to share your awesome armor sets.)

The goal with this update is to add a much more player oriented reward system, showing Halo gamers that their time is well spent. This seems to be incorporating the versus multiplayer with the main story of the game much more. Hopefully that means we can get some pretty sweet cR rewards for, oh, I dunno, co-op kills or assists? It should.