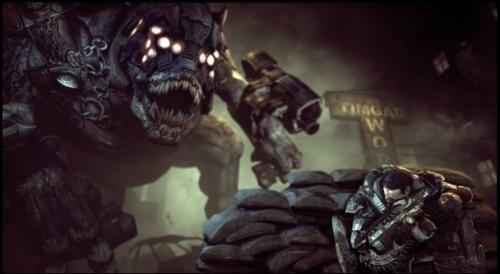 If you are still unsure what Cliff Bleszinksi's shock announcement is going to be on April 12th, perhaps the latest leaked information on Gears of War 3, gathered by Edge, may reveal a clue *mini spoilers ahead*.  There are plans to shake up the cover system and add some underwater elements to the game.  News has also just arrived of a leaked release date of April 2011.

Whilst once you could crouch behind cover to your hearts content, Epic have added new enemies that will force you to move.  These new Locust will have tentacles that can reach over cover and beat down a COG.  Not to be outdone, Marcus and co. will have new weaponry that will bury itself into the ground and explode underneath the enemy.  These simple changes should shake up how the game plays, making movement just as important as cover.

How better to move than in a massive mech suit?  Edge are suggesting that a Lost Planet 2 style mech suit will be available for the COG to lay down a XXXX ton of trouble on the Locust.  All the new features should be open to use across all gameplay types; campaign, versus and horde.

As well as gameplay elements, some story ideas have also been leaked.  The underwater segments will be set in the sunken city of Jacinto.  There will also be some levels set in lush forest, as seen in Epic's recent tech demo of the Unreal Engine.

What other elements would you like to see in Gears of War 3?  Will the bromance between Marcus and Dom flourish under adversity?  Will we see them don metallic swimming shorts for the underwater sections? Timan25 wondered why he was getting so many Freind Requests all of a sudden.