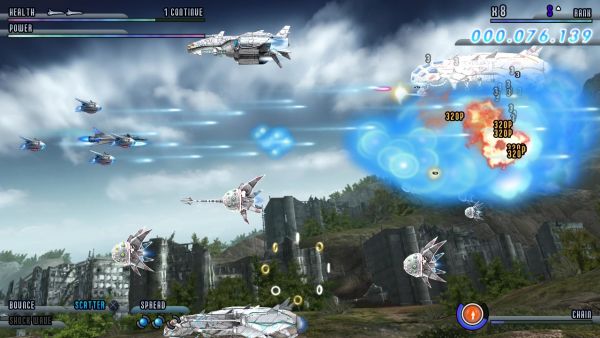 The Original Söldner-X: Himmelssturmer has possibly the longest and hardest name to say for a side scrolling shooter ever.  Seriously, it sounds like you have a mouth full of hot taco beef and tried to recite Shakespeare.  But there's a sequel now, one that isn't as hard to pronounce, it's called Söldner-X 2: Final Prototype and it's an upgrade from it's predecessor in a handful of ways.

Once again sporting two player local co-op, the sequel adds seven new levels and two new player ships to the mix.  Once again the gorgeous 1080p backgrounds and 3D graphics make a return with 2D styled gameplay, but perhaps the best feature of the game is the dynamic score linked difficulty system.  You see - the better you do the harder the game gets, the worse you do, the easier.  This constant balancing should keep the game fun, yet challenging.

Also new to the game is a challenge mode.   Players will revisit parts of the game and complete a variety of tough challenges to earn trophies, bonus items, additional credits and other unique rewards.

Over at the PlayStation Blog the game's publisher has just released a new trailer and announced the game will go live on the PSN in May for an undisclosed price, mouth full of taco meat not included.