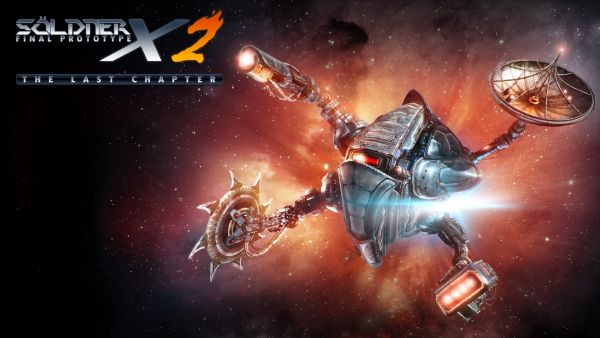 A few months ago we at Co-optimus took a look at the space simulator shoot ‘em up co-op title Soldner X-2: Final Prototype. We really enjoyed the games style, co-op campaign, and replayability from the start, but now there’s a new piece of DLC called “The Last Chapter” out there to round out the story. We’ve taken a look at this DLC, and here’s the impression you can look forward to from a co-op perspective.

In the DLC your ultimate goal is to reach the Dark Network to put an end to the struggle presented in Soldner X-2 once and for all (they're the bad-guys who enslave weakened systems and aren't very nice to them). By the end of the DLC levels you will have infiltrated the Dark Network, and the voice warns you to "expect heavy resistance" and man has that ever been an understatement. The weapon change-up is really interesting, especially with the rapid-fire homing missiles. Here is where co-op is key. You’ll often be flanked by rockets coming from all angles and directions. You can shoot these rockets to get them away from you, but they will hit you from behind (or, top-left, etc) if you don’t have a buddy covering your flank. Other new weapons are just mean. There are varying sizes, shapes, speeds, and directions associated with almost all of the firing in the DLC’s levels - and they’ll do everything in their power to throw you off guard for a piece of your life bar.

The enemies aren’t the only ones with new weapons, though. Early on I picked up this awesome green laser weapon that dealt an amazing amount of damage and moved in a fairly unpredictable way. There are a variety of upgrades through the game, but it seems like these ones take all of the power, life, and weapon upgrades one step further to match the enemies upgrades.

For those that purchased the game and need a little more oomph to it, the DLC is a great edition. This pack will round out the story and struggle of your faction, as well as giving you a few new (really weird) things to look at on the screen. As a shoot ‘em up title, Soldner X-2 is a very solid game. As prices go, it feels like this DLC should be included with the main title - but it’s certainly worth playing. The one challenge when playing co-op is how crowded the screen can become very quickly. With a shared health bar this is a huge issue, but can be absolutely worth-while when you get toward the bosses.

Without co-op it is possible to complete the DLC missions, but you’ll probably feel a little sad when that final grade at the end of the level is an “F” for “Missile up the butt” when you die a bunch of times. The bosses are often handled best with co-op as they often have single (very painful) weapon which can be dodged by one player while the other does the heavy damage, as are the little enemies that come from all sides through the rest of the campaign.

I really enjoy the gameplay and style of Soldner X-2’s DLC and hope to see the team do something a little more (with a bit more writing involved) in the future, but it’s not exactly perfect just yet.