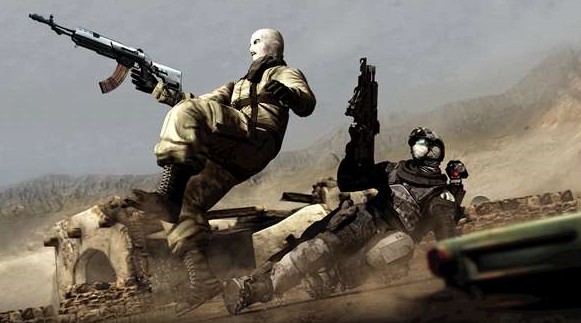 The wait for a new Ghost Recon game is almost finally over, and Ubisoft and Red Storm are taking the opportunity to make a number of significant changes. Tom Clancy's Ghost Recon: Future Soldier will be ramping up the speed of combat and the teamwork aspects of the long-running series. If Splinter Cell: Conviction is anything to judge by, the result could very well be a great game.

Each Ghost will be equipped with near-future tech, including a suit that increases the amount of weight that the soldiers can carry. It can also make them essentially invisible for periods of time. Different classes - examples being recon, engineer, and sniper classes - can be chosen by the player, giving them access to exclusive abilities or perks.

The first big noticeable change will be dynamic perspectives, as made famous by Red Storm in their last two games. In other words, the shooter elements will be played in first-person, and when using cover the camera will switch to third-person. It takes some getting used to, but any Rainbow Six: Vegas veterans will be right at home. This time, however, the Ghosts will be able to slide and vault from cover to cover, Sam Fisher-style. Mobile turrets are just one of the new class-specific abilities, but not much more is known yet.

Another new function - and probably the most drastic addition - is 'pairing'. At any time, up to four players can link up at the press of a button, moving as a single unit - the point man controls the direction while the rest act as mobile turrets. According to game writer Gabrielle Shrager, providing this type of simple interaction nearly eliminates the need for players to openly communicate.

I think it's one of the first games that will allow true collaborative play without forcing people to speak. There's no system that can do that without having to yell to your friends.

My gut reaction to the 'anti verbal communication' vibe of Future Soldier's development was to be defensive - chatting it up while playing a game is a major part of co-op. But I'll be honest: being able to work as an effective team with random gamers without having to open up my voice chat privacy settings to the scourge of the internet...is a nice prospect. Besides, it's not like voice chat isn't there - it's just not necessary. It's an option, something I always like to hear.

Combining with your teammates will also spread the perk love - all perks and special abilities will be extended to the whole team. And best of all: the classes and 'pairing' function will be present in both co-op and multiplayer modes, injecting the competitive versus gameplay with a little bit of natural co-op. The Cross-Com returns, but isn't the main draw this time around.

From reading various previews, it sounds like the fairly impressive array of different weapons available in Advanced Warfighter 2 is being ditched for a single, futuristic rifle with a better range of use. This makes me sad, but it's not confirmed; and even if it is, I'm still excited to see what the gameplay holds.

Check out the Joystiq hands-on impressions for more information, including shoulder-mounted rocket launchers (seen above) and Close Quarters Combat. And remember that anyone with a copy of Splinter Cell: Conviction gets access to the Ghost Recon: Future Soldier multiplayer beta test, where you'll be able to try out the new gameplay firsthand.