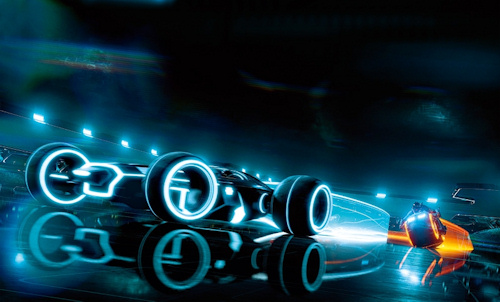 Having just gotten out of a 3D showing of TRON Legacy, the sequel to the 1982 film from Disney, one thing left an impression with me.  Sure the colorful visuals, the thumping soundtrack by Daft Punk, and the impressive 3D effects all were excellent; but what really stuck out at me was the reinforcement of co-op throughout the movie.

Warning: There are some minor spoilers ahead.

TRON Legacy is the story of Kevin Flynn's son, Sam, and his journey to find out what happened to his father more than 20 years ago.  As the story of TRON goes, Kevin found a way to digitize himself and enter a world called The Grid.  The world is supposed to be a visual representation of what goes on inside a computer, complete with people who are actually programs and paths of light that represent data.  Long story short, shit went down and Kevin Flynn found himself stuck inside the world he helped create leaving his son alone on the outside.

When Sam, now an almost 30 year old, uncovers his father's hidden lab underneath the arcade, it doesn't take long before he finds himself in the footsteps of his father before him.  The Grid is changed now, ruling over it with an iron fist is Clu, a program that looks identical to Kevin Flynn from the past - and created by him at that time.  Clu's goal was to create a perfect world - the problem - Kevin never gave him any boundaries in which to do that. It isn't long before Clu realizes what he has in Kevin's son and immediately challenges Sam in traditional TRON fashion complete with disc battles and light cycle races.   The light cycle races are the first time there's co-op talk in the movie, when Sam realizes he can't beat the faster AI cycles, he has to work with his team to defeat them.

In the traditional sense, we define co-op as humans vs AI, and while you could probably expand that definition to fit any team based scenario in a movie - TRON represents a unique opportunity - this all is actually taking place in what amounts to a video game.  This is humans, or the users, vs AI - or the programs.

Throughout the movie there's various times when Sam will literally say - "We have to work together."  Co-Op is reinforced not only through action, but through words in TRON Legacy.  Without giving away too much, Sam's journey finds him working with his Dad and a companion, a girl named Quorra.

These three find themselves in various situations where the only way out of it - is to work together.  Whether its flying a ship and manning turrets or knocking an enemy off balance so the other can have a killing blow, there is rarely a single battle in the movie that is won alone.  And every chance this happens, the characters remind us that they are doing just that.

TRON Legacy should live up to fans expectations, it fits within the canon, updates itself for the modern audience, and is a visual and audible treat.   And while the movie was really entertaining, it's good to know that in the end, good ol fashion co-op against the computer will win out every time.

Sorry, I just gave away the ending, didn't I?