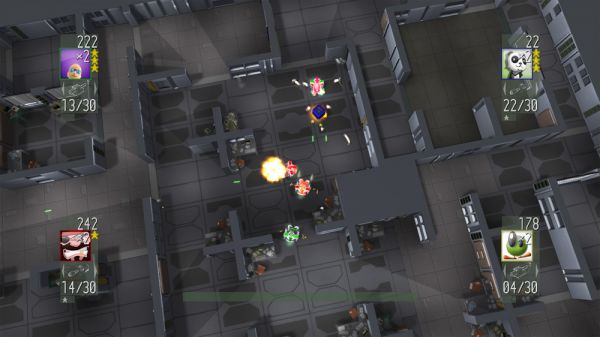 We've always had a love for independent co-op games at Co-Optimus. Whether a one man job or a small development house, these games usually have a lot of heart and soul to them. This week we checked out the Xbox Live Indie Game Quad Force; a 4 player local co-op top-down shooter using a few unique elements. The goal of the game is to survive a series of waves on a different maps with your buddies. Here are a few impressions based on our experience.

To begin with, Quad Force has some interesting music to listen to while playing. A bit difficult to describe, it's a lot of fast paced instrumental metal blended with some chiptunes. Visually the game is also very appealing, as players control "ATV" trucks that appear to be hovering, each with a different color. The ammo bar for the game is attached to the vehicle on either side. Flashing red is bad, and the bar flashes more as you get lower on ammo. The environments appear to be office buildings (and who doesn't want to ride ATV's around their cubicle?), but they've got a bit of a twist.

The one really unique element, which also appears in the Indie Game channel description of the game, is the "realistic line of sight." You are in a room with various partitions, and you can't see enemies that are in blind-spots behind those partitions. This element may have worked a bit better if the fog-of-war areas were more blacked out, otherwise it was a bit frustrating to round a corner into a handful of enemies. Co-op had a few benefits, and a few disadvantages for Quad Force. First, having a co-op buddy is awesome for flanking and taking out bad guys behind walls. Since you have a limited amount of ammo, if you communicate correctly, you and your co-op buddy can effectively take out the majority of the enemies efficiently. You have to be careful and hope that you can cover your buddy/buddies when it's necessary, because your co-op ships share a single damage meter.

Co-op also has its own set of unique challenges. First, since the environment is partitioned like an office building, there are a lot of choke-points for enemies, and your co-op buddies. I wasn't able to discern if friendly-fire caused damage, but it certainly wasn't helpful in the long run. We also blocked each others paths, making the second partner feel helpless. "Why didn't you just go around the partition?" You may ask. Well, the scale of the game made everything really small. The further you got from your buddy, the smaller the scale got. Seeing gray enemies on a gray background became a real challenge. Hitting these enemies with your Quad caused damage to your vehicle.

I feel the friendly-fire issue would have been resolved with some precision or some kind of aiming device, especially because this is one of the few top-down dual-stick shooters that I've seen that forces the player to reload. Without any visible bullet players rely on the impact point of their shot to determine where they are aiming. A cross hair, line-of-sight laser, or some other visual feedback device would have really helped in my level of frustration with this aspect. Another thing that bothered me about the weapons in the game came from the fact that all of the weapons are automatically in your menu when you load up the game, but you can't use them. If you hit the bumpers left or right, you could be cycling for quite a while before you find the one you need.

Overall, I found the Quad Force experience to be very innovative, but I would have enjoyed my time a bit more with a few tweaks or changes in the overall gameplay. With something like this a story may also explain the surroundings, why the ATV appears to be hovering, and who the enemy is. A noble effort that could become a great co-op title with a few changes. More information on the developer can be found here.