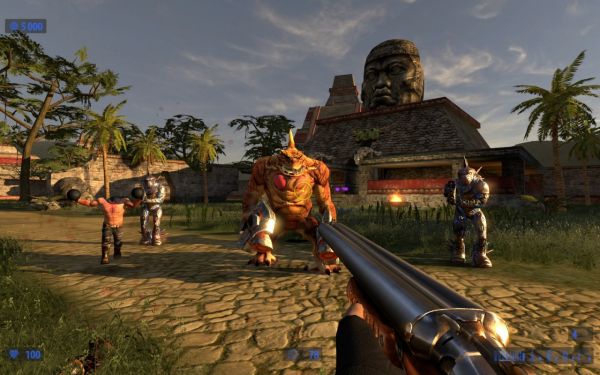 Devolver Digital and Croteam have announced that Serious Sam HD: The Second Encounter is out now on the PC and available to download via Steam.

Along with new secrets, updated graphics, and versus modes comes a brand new survival co-op mode to go alongside the already insane sixteen player co-op campaign.  If you read our review of the First Encounter, you know the style of game is quite enjoyable, at least for a remake, and the new Serious Engine 3 sure makes things pretty.  Hopefully the Second Encounter continues that tradition.

·         Take on 27 outlandish warriors in Lord Mental's army, including old favorites like the Beheaded Kamikaze, Syrian Werebull and Kleer Skeleton.

·         NEW! Multiplayer Survival Mode - Try to stay alive as long as you can against continued enemies’ attacks in specially designed survival maps.

·         NEW! Versus Modes - Fight against your friends in more versus matches including all new Beast Hunt and My Burden modes.

·         NEW! Team Modes - Compete against other groups in team matches including Team Deathmatch, Capture the Flag and Last Team Standing.

The game will set you back $19.99.  An Xbox Live Arcade version will be out later this year.