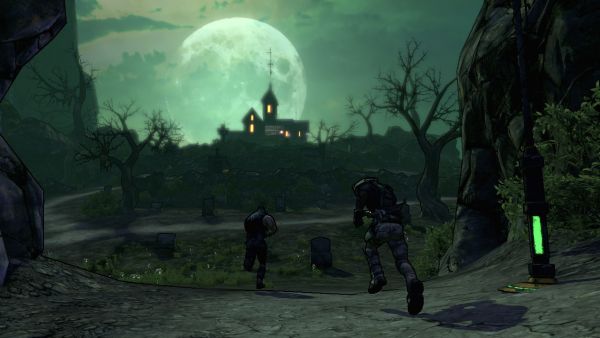 It's been a while since I've done one of these, huh? I suppose the realities of being a new father include forgetting to write the weekly column you only have to cover once every six weeks or so. So I apologize!

Speaking of being a new father, my tale, albeit a short one, is about how co-op can soothe and restore the frazzled nerves of a man wracked with responsibility.  A few weeks back, I picked up the 360 version of Borderlands. I already owned it on the PC, but the lack of friends to play with combined with the slapdash manner of its release made me put it down early. However, upon obtaining the new version of the game, I downloaded all of the fresh DLC and started a new character, figuring I'd plunk a few hours here and there between shifts with the new baby.  One weekend, Jason came over to hang out, and we decided to fire up some splitscreen co-op (something I am usually adverse to). After twinking his new Berserker near a level somewhat closer to my Siren, we decided to set out for the Zombie Island of Dr. Ned.

We've covered that content somewhat thoroughly on this site, so I won't bore you by describing it again, but it seemed like we were gonna lazily marathon our way through the entire DLC pack, and after several hours of headshotting and/or converting zombies to pink mist, we came near the end.

This was not the case.

When he wouldn't relent, we looked at each other and decided that this was just one more thing that needed to be done, so we spent the better part of another hour resetting the Zombie Island and mowing down zombies until we had the requisite number of gray matter masses for our unflinchingly hungry acquaintance.  Once we turned them in, he thanked us, between gorging himself silly, by vomiting up a piece of crap handgun.

After all this, hours had passed, and despite succumbing to the desires of our undead compatriot, I felt somehow refreshed, like nothing my new child could throw at me would faze me anymore.

After all, I had met the challenge of T.K. Baja.