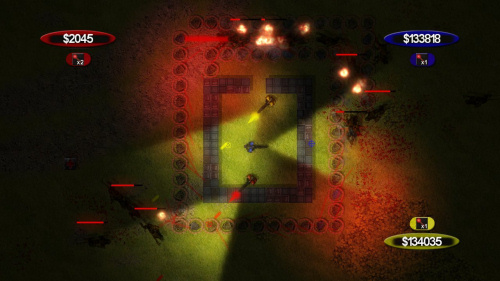 The Xbox Live Indie channel is growing and growing in terms of quantity, but what about quality?  We've seen some improvements there as well.  One such example is a new game called Murky Horizon.  The game borrows from twin stick shooters of the past, like my favorite Smash T.V., but adds in the extremely popular tower defense genre to the formula.  Splash it all with four player co-op and you're in for a fun ride for only $1.

The game has a loose story which places you on a planet trying to defend an entrance to an underground colony.  Endless hordes of lizards attack you, and your team's job is to fend them off.  There's a few things at your disposal, including weapon upgrades you'll find laying around - but your main form of defense will be turrets and boxes used to eliminate the slimy bastards.

At first it's easy, but as time goes on the horde grows stronger and the light gets less.  For every kill you'll earn money, able to place more structures to add to your defense.  But as night falls these structures require light to see their target.  That's where flares come in.

Overall I was impressed with the little I played of Murky Horizon.  The game offers four player co-op in local play only, but it definitely adds to the experience.  For $1 you can't go wrong, and there's always a demo to wet your appetite.  The developer is also giving away copies of the game on the official website, so you may want to check that out.

If you're a fan of Indie Games be on the lookout next week to Co-Optimus as we'll have and exciting new column for you!