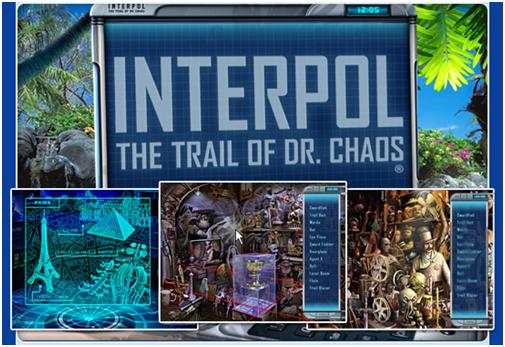 
Hello gentle reader, and come with me on a journey into a relaxed world of gaming far away from your competitive versus.  This is a trip beyond even the laid back pleasures of co-op campaign with a group of friends.  We have arrived at our destination; the land of the hidden object game, a place that takes minimal effort to enjoy and has little in the way of challenge.  However, below its serene surface lies a cold hearted succubus ready to rip out your soul and leave you in tatters.  Interpol: The Trail of Dr Chaos was the game that almost broke me.

Before I go any further I would like to point out that I am not a fan of hidden object games.  I find that they are mostly cynical and cheap games that reuse many of the same elements.  My partner, on the other hand, is a fan and since buying a new laptop she has worked her way through several of these mini mysteries.  When I noticed that XBLA had its own hidden object game that would allow up to 4 players to co-op I thought it would be a nice (if slightly patronising and uninformed) treat to buy.  It was for this reason that I found myself with a copy of Interpol and a partner to play it with. The aim of the game is simple; you play as a group of agents on the hunt for Dr Chaos in famous cities throughout world.  You are given a static screen which contains a series of hidden items that you must find.  Up to 4 players can play at once to hunt for the items using a magnifying device.  With a hint system and generous time limit the game is a simple, but enjoyable, affair which lasts for a decent length of time. In fact, when I completed the game and unlocked the final story achievement I looked across at my partner and admitted to enjoying myself, but that I was glad it was done with.

It was then that I noticed the crazy look in her eyes.  Its one that I have grown accustomed to in my time and it is what highlights perhaps one of our greatest differences.  I am someone happy to play a game through once, not really bothering about bonus items etc.  Conversely, my partner is a completionist and must get every single thing before calling it a day.  This had began in childhood when her drive for completion had made her test every wall in Wolfenstein 3D just to make sure there was no hidden Nazi Gold.  When she spotted that I had not unlocked all the achievements in Interpol, it was far from over.