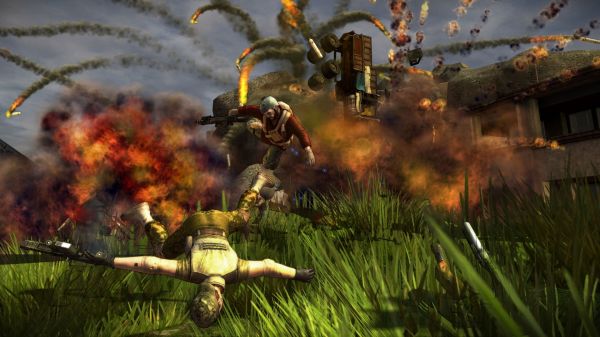 We're only a little more than a month away from the launch of the four player co-op sequel to Crackdown.  A lot of us are looking forward to Crackdown 2.  We spend each night dreaming of the gentle pulse of an Orb, the rumble of an explosion, and the thud of thug hitting the pavement after a roundhouse kick to the head.  All of these things will soon be ours, but some lucky bastards already got to experience the game with hands on previewing finding their way all over the internet.

Luckily we've wrapped up everything in a nice convenient  tour around Pacific City for you.

Our first stop comes from a site called Digital Spy which has an interview with the game's producer, James Cope.  Right from the get go we learn what's most important to us - co-op.

Four player co-op is one of the largest new additions to the game. Was this difficult to implement from either a technological or design perspective?


"Both really. From a technology point of view we had to rip Crackdown apart and start again, do all the networking from scratch and get all that working. It was completely different architecture that we needed to do to get the Crackdown experience into four player co-op and 16 player multiplayer. From a design point of view, it's really tricky because we wanted to make sure that inCrackdown 2 we had an experience where the co-op wasn't so much as about sitting together and doing things together but it was about playing together - like we're online, talking to each other and having the same game experience - but we might not be able to see each other, you might be doing something on the other side of the world, and I might be doing something else. That was the co-op experience in Crackdown. What people really loved in Crackdown was that you could be doing a mission, and then someone would say, 'Oh, what's that shiny thing over there?' and they get distracted and all of a sudden you're playing improvised golf or something. That what'sCrackdown 2's co-op is like."

Those improvised moments are what makes Crackdown so damn fun and something like that wouldn't be possible if it wasn't for the random objects that litter the world . These Toys are explored in the latest Vidoc for the game.

Now that we've had some playtime, it's time we get down to business.  Our pals over at Joystiq went hands on with the game and got to check out the first few missions.  To our surprise it's not all roses and rockets, with the game showcasing an interesting problem perhaps the designers didn't consider.

At a recent preview event, I played a chunk of Crackdown 2 starting from the beginning, and I was taken aback by how slowly paced it was. My fondest memories from the original game were of (eventually) leaping high into the sky and taking out enemy forces with devastating power. However, the sequel starts players as a new Agent -- from scratch. It will take time to regain all of the powerand then some -- namely that new gliding ability -- that players harnessed in the first game.

If you think about it, it's an interesting conundrum.  Something we've seen happen in many sequels.  You spend a lot of time leveling up or unlocking powers for your character.  By the time you complete the game you're an uber badass.  But in the sequel, you're forced to start over in someway - either by having your powers stripped or having a different character all together - the latter being the case with Crackdown 2.

So longtime players and fans of the series are going to feel a bit of the molasses syndrome with Crackdown 2, there's such a difference between how it feels to control a fully powered up agent and a rookie that it changes the entire dynamic of the game.  Still Joystiq's Xav de Matos goes on to say that he's excited about leveling up his agent again through "addictive grinding mechanics of collecting orbs and taking on the masses of freaks who come out at night."

Speaking of those freaks, the latest 1UP preview - complete with videos - really showcases just how different these bad guys are.  It looks like a scene from Dead Rising, the team of agents stand high on vehicles while swarms of the freaks attack them.  Hundreds of these lumbering bodies litter the streets, swaying to an invisible beat, intent on killing you.

You can check out their full preview page for even more videos of Crackdown 2, including some fun with the new magnet mines.

Finally our journey ends at IGN.  Like any good road trip, everything doesn't always go smoothly.  Sadly it seems that while IGN enjoyed the cooperative aspects of the game, the new weapons, and the new rewards - they were kind of surprised by the quality of the graphics.

On the flip side, Crackdown 2 is not looking too hot. A high level of detail just wasn't present, and even the explosions looked rather low-resolution. Add in a few bugs and some framerate hiccups and I was left a bit worried. The gameplay is a blast -- especially when you get a group together to play cooperatively – but it doesn't look like Crackdown 2 will be able to compete visually with some other recent sandbox games. There isn't much time for everything to come together into the complete package, but I've got my fingers crossed.

Sadly it's also been revealed that single player mission progression is only saved for the host player, though Agent progression does carry back between your single and multiplayer games.

And there you have it.  Enough Crackdown 2 news to get you in the mood, some good - some bad - all exciting.  Go ahead, take a deep breath.  It'll be here soon, don't worry Agent.  Hopefully we'll have a chance to go hands on with the game at E3 2010.