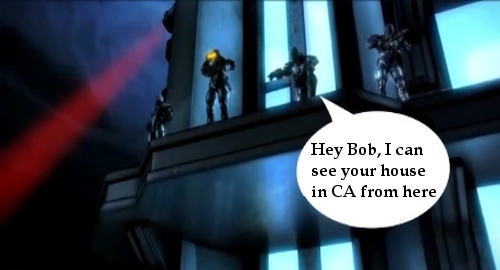 Crackdown offered a challenge to those gamers who sought vertical thrills as a break from the every day busting up crime syndicate routines in the form of the Agency tower, a feat that promised some unintentional hilarity if you brought a buddy along.  Well it seems that Ruffian Games wasn’t content to let the tower be the highest point in Pacific City anymore, and has now increased the distance from the lowest point to the highest in the city from just under 400 meters (approx. 1312 feet), to over 1000 meters (approx. 3280 feet).  To put that in some perspective, the Empire State Building, with pinnacles and antennas, is roughly 440 meters tall and the current world’s tallest building, the Burj Khalifa, stands at an impressive 828 meters.  Sounds like you and your buddies will have a lot more agility orbs to track down in order to make it to the top of the buildings in Crackdown 2; just try not to hit kick each other in the head along the way.

Steve Iannetta, the lead designer for Crackdown 2, went on to tell Eurogamer that it wasn't just the height of the buildings that got a bit of a redesign, but portions of the city as well.

While we have kept the basic island structure, and to some extent the road network, we have really focused on creating a city that shows the consequences of its history, specifically the 10 years that passed from Crackdown 1 to Crackdown 2. Basically, the city's history became our style guild [sic]. We wanted to see evidence of every battle fought, every area that was abandoned, every wall erected to contain the virus, and every breech point where they failed.

A new cityscape to run amok in with your friends? So how early is "early next year" exactly?