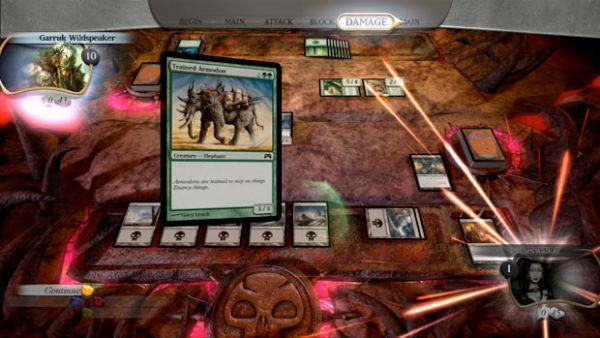 You can leave your poker face at home when Magic: The Gathering - Duels of the Planeswalkers heads to Steam this June. Until now, Duels of the Planeswalkers has only been available on the XBLA where it contains a single player, competitive mode, local co-op mode, and two-headed giant team vs. team mode. Unlock colored/themed decks by playing the games campaign either single player or cooperativel, and unlock cards by using those decks.

The system is very straightforward to learn for those new to the Magic realm, but familiar to the experienced Planeswalkers. As we understand it, we'll see the full game plus the first expansion for $9.99, where the PC game comes with all of the bells and whistles available in the XBLA version (sorry Mac Steam users, PC only - for now). Steam lends us the ability to communicate, so perhaps we will see an online co-op game with this one. Starting June 1, 2010 you can pre-buy Duels of the Planeswalkers on PC Steam, and we will keep you posted on any co-op details for this title.