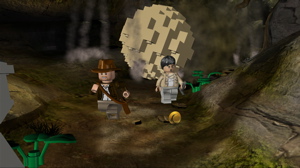 But on Wednesday I found out that the actual design plans for the game do not call for four-player co-op. That feature is not planned for the game.

A producer for the game has confirmed that. “‘LEGO Indiana Jones: The Original Adventures’ will feature the user friendly drop-in/drop-out two-player cooperative feature that players have come to know and love,” the game’s producer, Shawn Storc, said to me in an e-mail provided by LucasArts public relations. “However, we are not expanding this feature to a higher player count. I certainly do apologize for any confusion that has arisen; we must have been in a LEGO induced haze at the Collector’s Party.”

Dissapointing news indeed.  In fact, if you look at the internet's response to the news, you can see people are CRAVING these kind of features in their games.  Hopefully developers can see this and start adding the what people want.