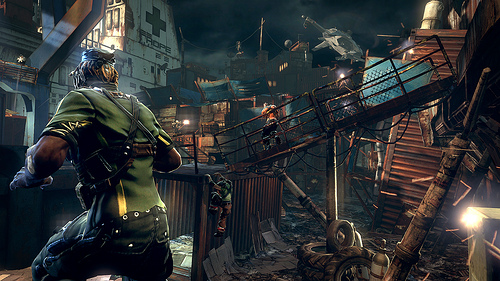 Colony of Gamers has posted an interview with Splash Damage Creative Director, Richard Ham, concerning the upcoming 8 player cooperative Brink.  While co-op is discussed a bit, we do get some good details on how character progression will work as we bring our different characters between games.  The game will even offer an option to power level up a new character with "extra XP" from another.

Have you decided whether or not players will be allowed to change body types or factions, or are these choices permanent? If I create a second character to explore some of the other options, does he then start over at level 1, or does my XP carry over across all my characters?

You can change class at any time during a mission using a Command Post, and when you’re between missions, you can change your body type via the appearance customization options.

If you’re playing through a storyline campaign, your faction will be locked to that of your chosen campaign. If you create multiple characters, you can transfer XP from one character to another; so if your first character has a lot of extra XP and you want to level up a 2nd character really fast, just give him some XP from your first character.

Other information in the interview talks about the game's weapon count which caps out at twenty four, the innovative SMART system, and kits.

There's also good news for console players in terms of the match making interface.  It sounds like a lot of time and effort was put into the game to make it incredibly easy to jump into a game with your friends or party.  Fret not PC gamers, Brink will have dedicated servers as well!

Lots of other great info over at Colony of Gamers.