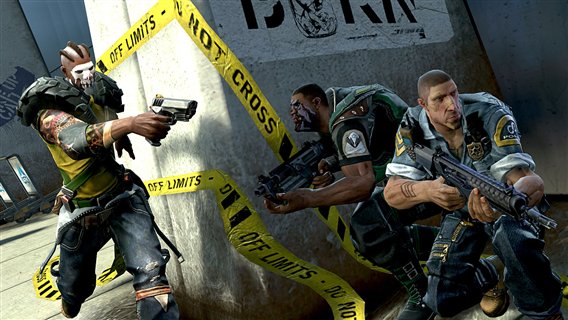 As if you need another incentive to play co-op in the upcoming action game Brink from Splash Damage, the clever folks on the team have figured a way out to reward players simply for supporting their team mates.

The way it works is that team mates that are standing near each other enter into an invisible retainer like area.  When in this area the experience counter will start ticking up, giving players points to upgrade their character simply by standing close by.

So to take an example, lets say at the start of the security tower, Richard takes the mission to plant the bomb on the conduit. If I then go into my mission, that’s when I play as a medic, when I go into my mission system, the number one thing it’s going to ask me to do is escort Jolly.

Now, if all I do is run over and stand near him and engage in combat near Richard, I’m going to start to get XP ticking into my retainer, going on just like five, five, five just because I’m near Richard and I’m doing stuff.

Furthermore, actions like healing a team mate will bring even bigger XP bonuses.  Obviously you'll still earn experience for kills and completing objectives, but this gives some incentive to stick together instead of going out to die alone.

Now the only question is, when playing with seven other folks, is it one massive wad of XP if you huddle up?