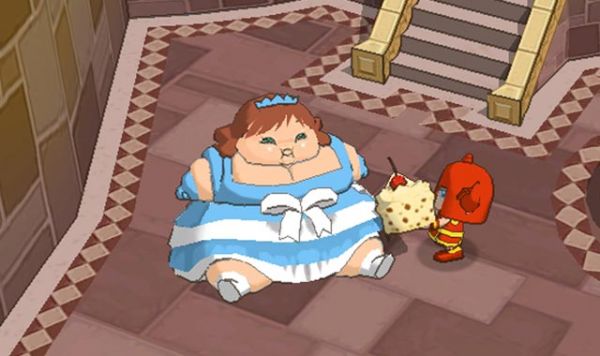 Fat Princess has been a hit on the PSN for 2 years now. Friends competing to weigh down their princess so they can't be stolen, sort of a twisted take on capture the flag. The goal is to "rescue" the princess from the other team, but that team can steal her back if you're not careful. Best way to prevent that? Feed her cake, so the fat princess is harder to reclaim.

In Fat Princess you're given a choice of classes for your character, and will also be tasked with collecting ore and wood resources to keep your forces going. All I've personally ever heard about is the massive versus mode (30 players), but apparently there is more to it than that.

There is a story mode to all of this chaos, and before the patch that's being released, you had to rely on idiotic A.I. to get the job done. This patch, v.1.06 will allow for 4 player local co-op through the story. You'll basically be fending off enemy A.I. from reclaiming your princess, but we kind of want to see this for ourselves before we believe it.

Local co-op without the splitscreen does pose a few challenges, including keeping all 4 players in the same area of the map, and no long-distance cake parties. We'll try to get our hands on this after the patch and let you know just how co-op we're talking here.