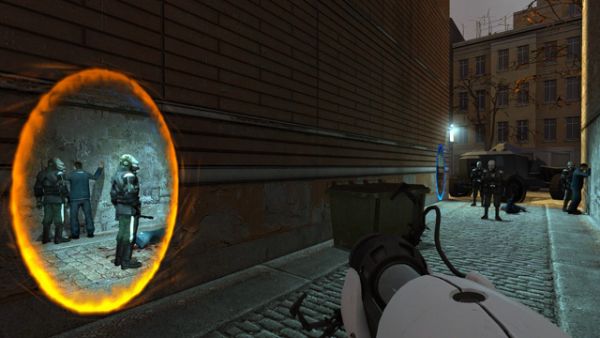 Portal 2 has us anticipating a lot of awesome gameplay, but also leaves us with a lot of questions. Most importantly - how can the awesomeness of Portal be co-op capable? Joystiq and CVG have taken a look at the co-op gameplay as proposed by Valve software, and boy does it sound interesting.

As somewhat expected, the co-op portion of Portal 2 will be separate from the normal campaign. Players in the single-player will once again play as Chell from the first game, but the co-op players will be playing as robots instead - this helps Valve justify how often player one or two might die, without having to worry about cloning Chell.

The essence of Portal will be intact with the level of challenges. Valve expects players to die quite often trying to work out the challenges, and part of that challenge will be communication. With voice chat, players can talk to each other and communicate their issues, but they've also addressed the conversation: "Put the blue portal here." "Here?" "no, right there."

Portal 2 will have the ability to leave markers, or printed requests much like were found around the first game. This will help with precision and figuring things out together. Working together will be essential here, since players are now dealing with 4 portals, instead of the standard 2. Extra portals just means more possibilities, so the game will make sure you're familiar with everything you're capable of along the way, while still challenging players in the true Valve fashion.

Although it notes that the essence of Portal remains; you build up your knowledge of the range of feats that can be achieved as you work through earlier puzzles, becoming increasingly familiar and comfortable with your abilities as you progress. And puzzles remain to challenge players in ways that make them stop and think of a plan to execute - much like the finales at the end of Left 4 Dead missions.

This article also brings up the question of whether or not Portal 2 will be out on PS3, Xbox 360, and PC in 2011, which is confirmed by Valvesoftware.com. Portal 2 will be available for PS3 owners as well as Valve's usual Xbox and PC. Rejoice, for science.