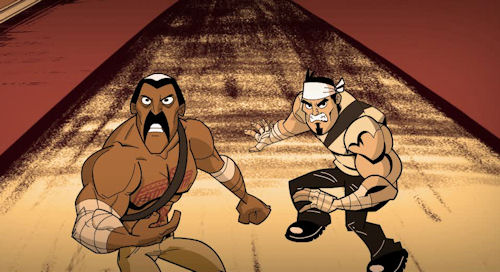 We last saw Shank at Pax East in March of this year.  At the time we had no idea the game would contain a co-op mode, in fact, according to the developer Klei Entertainment - they wanted to keep it a secret.  So after coming up with the idea to have a separate co-op campaign (the single player was already designed) - Klei went to work to create a fun experience with levels and bosses designed for two players.  But this isn't just some survival mode, instead it's a full fledged backstory to Shank's single player campaign - complete with cutscenes and more.

Now months later, Shank is ready to release to the masses on Xbox Live Arcade, PlayStation Network and PC.  The console versions will arrive on August 24th and 25th, starting with the PSN, with the PC version hitting this fall.  The pricepoint is set at a fair $15.

The only downside is the co-op campaign is local couch co-op only, so you won't be able to share the experience with a friends via Xbox Live, PSN, or the intertubes.  I hear knives and the intertubes don't play well together anyway.

We've got some screenshots below of the co-op campaign, and as you can see, the same gorgeous hand drawn art style is still present.  So will you be shanking with a buddy next month?