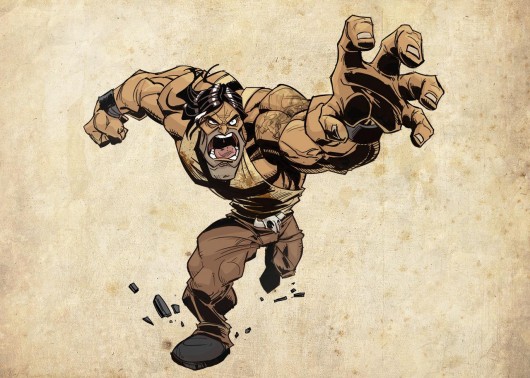 When I wasn't waiting in line for Co-op games with the CoG group or Co-opticrew on the PAX East floor, I was scoping out a few non-co-op games to fill my time. Two of those, which I enjoyed enough to go back for seconds, were Raskulls, and Shank. We got a brief preview of Shank at PAX Prime last year, but no hands-on time for this Shadokat. Raskulls was just a convenient thing to play while the others got busy with a nearby Crackdown 2 booth, which was a pleasant surprise to play

Here are my impressions of these non-co-op, but still quite enjoyable titles. Raskulls to the untrained eye appears to be an ultracasual platforming game. Not true. Raskulls takes you on a Mega Quest adventure through a ton of worlds that actually require gamer skill and logic to complete. The skills you use vary from free-falling, swimming, and bashing your way through obstacles while you avoid being crushed. That last part is especially important.

When traversing the deceptively colorful world of Raskulls as one of many awesome little characters, you'll do a lot of vertical exploring along with the traditional side-scrolling platforming adventure. That being said, in order to drop to a lower area, you'll have to bash your way through - destroying bricks to drop. But, you'll also damage the integrity of those bricks causing them to drop as well, and you'll get smooshed if you're not fast on your thumbs.

Destroying the bricks to move on is also a very puzzle aspect of Raskulls - move through without being smashed, but in the multiplayer races, or against "boss" characters in the storyline that are also racing to your destination, it could slow down your opponent. So, triggering just the right shift in bricks at just the right time is essential to winning. The games multiplayer was a series of races against one another. They were surprisingly fun, and challenging as you build up your boost meter and use it at just the right time. If you manage to block someone while boosting, you are an effective Raskull. If you manage to boost at just the right time, you're also an effective Raskull. There was a great element of skill involved, so don't be fooled by the bright colors - those are just to lour in your victims.

Raskulls has 3 modes, Mega Quest (campaign), Grand Prix (series of races through various maps), and Quick Versus (one race on one map). Overall, extremely enjoyable game, out on the Xbox LIVE Arcade soon! At PAX Prime there was a display booth with the name Shank on it. They had a few demos available, but not many details and I didn't get a chance to play. So, at PAX East I got my hands on a very clean build to try out Shank. Considering the game has been announced for approximately 6 months now, I was very impressed with the game I played.

I didn't get a solid handle for the story just yet, but basically the game follows a guy aptly named "Shank" who runs around - er - shanking. He's attacked from all sides through a variety of platforming levels by crazy scary looking guys, and he doesn't hesitate to dispatch them. He wields guns, grenades, a chainsaw and his trusty shank. The gameplay that I saw was so smooth, it looked ready to go as-is. I was able to switch between chainsaw, shank, and machine guns faster than any human being should be able to - but Shank can. Everything on the screen cowered at my approach, enemies died, blood was spilled. The demo was approximately 15 minutes of gore, great animations, and fun gameplay. It ended on a boss that is best described as "OMG, that's a huge.." Okay, I won't finish that. But he was gigantic, complete with a bull rush that incapacitated him if Shank used some cool wall-running moves. Here's a gameplay video to give you a better idea. I for one am going to be keeping an eye on this. The platforms Xbox LIVE Arcade, PSN, and PC have been announced, but Shank is still "in development" with no release date just yet. That's okay though, it'll be well worth the wait.