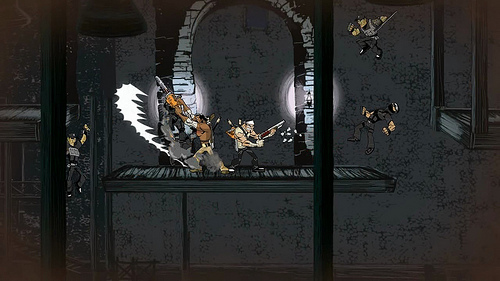 To the community that was watching the development cycle of Shank from a distance, the single player campaign just felt too epic to mess with, but co-op sounded too sweet not to demand. To the developers, the single player campaign is too epic to mess with - so they had to make a few decisions when they decided to upgrade the game to include co-op.

Instead of just tacking on a second player that may or may not be involved in boss battles, or any other part of the story, Klei entertainment decided to create two separate campaigns to cover the co-op, as well as keep the brilliant single player experience intact.

Finding that delicate balance wasn't this teams only challenge, releasing on two separate platforms, and getting enough community involvement to justify "biting the bullet" to add co-op has also come about. Here's how you can help them help you: Become a fan of Shank on Facebook, and they'll give you a shiny free copy of the games soundtrack to enjoy.

How’s this for some Shank fan-love – an exclusive track from Shank’s original score! The soundtrack for the game was scored by our friend and local Vancouver musician Vince De Vera, and since we've been asked about it countless times, we’re going to share his work with all of you. That’s not all… if we can get 1,500 people to show their love for Shank by joining our community here on Facebook, we’ll release the ENTIRE soundtrack for free… in all its DRM-free glory. If you’re excited about Shank, spread the love, and help unlock the full soundtrack for free, and remember that REVENGE CUTS DEEP August 24th!