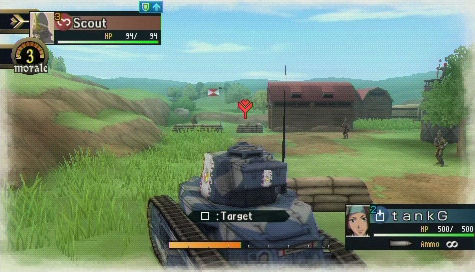 We've been chatting about Valkyria Chronicles 2 for quite some time, excited by the prospect for co-op play in the beautiful tactical RPG sequel.  Now we finally have some concrete details on just how the mode will work thanks to a PlayStation Blog video interview with Sega's Aaron Webber.

The interview covers a wide range of topics for the game, including some tactical changes and additions.  Obviously though, the most interesting part for us is the game's co-op mode which gets discussed around three minutes into the video.  From the sound of it there will be two co-op options available via AD-HOC play.

The first will allow you to invite a friend - who can bring any of his characters along - into your campaign to help you complete individual missions.  The second co-op mode is in the game's multiplayer maps and is of the comp stomp variety.

Valkyria Chronicles 2 is set to hit the PSP at the end of this month and is shaping up quite nicely.  If you've never played the original, I highly recommend it.  It's a brilliant and beautiful game on the PlayStation 3.