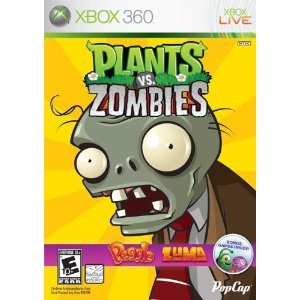 Plants Vs. Zombies was a casual game smash last year, and saw releases on PC and iDevices.  As a tower defense fan, I picked the game up off Steam and really had a good time with it.  A simplified tower defense formula coupled with a whole bucketload of humor and charming graphics made for a great combination.  Next month, Xbox 360 gamers will be able to enjoy Plants Vs. Zombies for the first time, and best of all, there's a brand new co-op mode!  Two players will be able to select their own seeds to plant, and by working together, they can defend one lawn from the undead invaders, all at the same time. Player 2 can drop in and out of the adventure mode at any time.  The zombie killin' action begins on September 8, for $15.

If you are willing to wait a little bit longer, there will be a retail disc version released on September 28.  Bundled together with Pop Cap's Peggle and Zuma, the package will set you back $20.  That's a nice bargain for any casual game fan.  Remember you can support Co-Optimus by purchasing the retail disc version at Amazon!