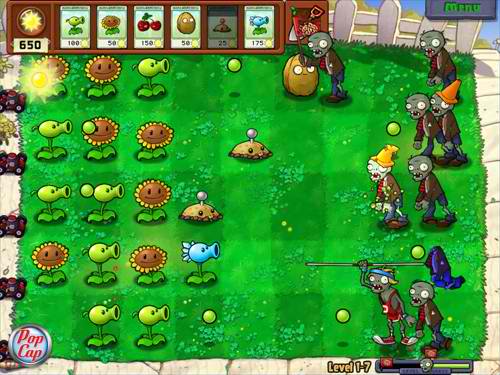 Attention PlayStation 3 owners!  PopCap Games' Plants Vs. Zombies will be coming to the PlayStation Store. Originating on the PC, Plants Vs. Zombies is an incredibly popular tower defense game that made the transition to the Xbox 360.  Along with this transition came co-op support, allowing two players to team up locally in order to battle the undead horde.  Players are tasked with using a variety of specialized plants to stop wave after wave of zombies.  We gave the game a 4 out of 5 in our co-op review.

If you already own a copy of Plants Vs. Zombies, you owe it to yourself to buy another one.  According to PopCap Games' Jeff Green:

The more versions of PvZ you have, the higher your quality of life will be. Also, you'll just be that much more attractive to members of the opposite sex. Or same sex. Whatever you're into, really.

I can personally attest to this.  I own three copies of Plant Vs. Zombies, (two for the PC and one for the Xbox 360) and now I live with three females that require my constant attention.  Sure, that attention may come in the form of cleaning the house, changing diapers, or even feeding one dog food, but my quality of life is amazing. We hope the PS3 version gets the same co-op treatment as the 360.  No release date is set, so stay tuned to Co-Optimus for your botany/zombie details.