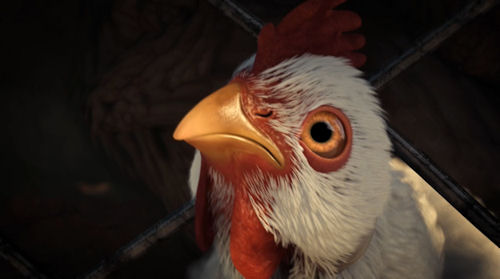 Lionhead has always had a thing for chickens in the Fable games, but with Fable 3, they may have taken it to new extremes.  We've heard your character called "chicken chaser" before, we've had achievements for kicking chickens, heck - we'll were even able to dress our character as a chicken in Fable 2.

But Fable 3...the entire intro cinematic is an allegory for revolution featuring a chicken escaping the clutches of death, or at least escaping a tasty rotisserie demise.

In a world where freedom is nothing more than a dream, Albion’s oppressed and downtrodden citizens desperately need a hero. Against all odds, our aspiring hero dares to take a stand against his sworn enemy and puts up a rebel’s fight, paving the road to revolution for those who follow. However, he’ll quickly learn that revolutionaries can’t triumph alone. Will this brave chicken succeed in his quest for freedom or will he pay the ultimate price? The tide is turning and the uprising has begun – will you follow his lead?