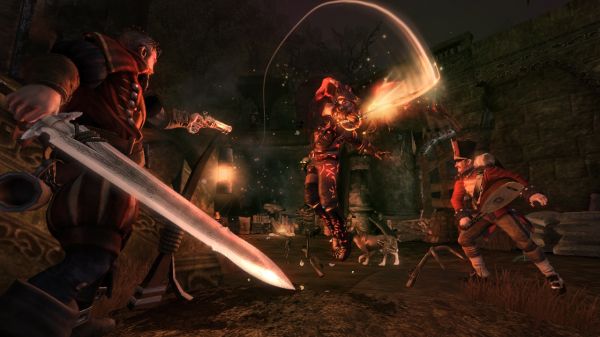 Microsoft's X10 has come and gone, and as Peter Molyneux promised, Fable 3 has been revealed.  Lionhead's Molyneux also promised you'd be super pissed about one of the game's features, but it appears even the nega-hype generated by one of the industries greatest minds also falls short of expectations.

So what was he so scared about?

The biggest change in Peter's eyes is the game's HUD, or lack thereof.  Gone are health bars, experience points, and anything else that clogs up your view of the game's world.  Taking a cue from a lot of first person shooters, Fable 3 is now more of an action game than an RPG - and all of this is what made Molyneux think people would be upset.  Doesn't seem to damaging to me.

But that won't be Fable 3's only change, as with previous Lionhead titles, the team is trying to bring people closer to the game's world and characters making the experience personal and unique for each player.  The next evolution of this is the "touching" mechanic where players can actually interact with other characters on the screen by holding their hand, dragging them by the scruff, and other not so subtle methods to convey an action.

Molyneux's character then walks up to a homeless man and takes him by the hand. The man follows, saying that he thinks he's taking him home for a dinner. Then the man stops in his tracks as they turn a corner and a factory looms ahead.
"We're going to sell him to the factory," Molyneux says.
The man, visibly frightened, begins to pull away, but the character continues to drag him to the factory.
The homeless man begins to beg, "Don't sell me to those fiends. You might as well put a bullet in my head."

Apparently this system also applies to the game's co-op mode, which according to various previews, is a more true co-op experience.  Players are no longer tied to each other, and are free to roam the each other's respective worlds doing stuff independently.  The touching feature extends so far that you could even marry your co-op partner if you wish.   Check it out, in game co-op couples!

Henchmen are finally gone.  Yup, players will be able to bring not only their character into friend's games, but also their dog. On top of that any customizations they've done or their morphed weapons. Which brings us to the final and possibly most controversial piece of Fable 3's unveiling.  Weapon morphs allow players to customize their weapons based on their actions in game.  A sword that kills lots of innocent victims may drip blood all the time, or one that is used for good might shine brightly.  All of these action go into creating randomly generated and changed weapons over time.  But it's not just your in game actions that change your weapons, it's your gamerscore.

In what is perhaps a bit of irony, the number that means nothing more than "e-peen" to some people will now change you weapon.  We can only hope the bigger the score the bigger the weapon to make this a reality.

The morphs actually extend into expressions as well, as these mega morphs can make your character truly stand out.  One example given was a truly good character could sprout angel wings, have divine light shine down on them, and really have an affect on the environment around them.

All in all it looks like Fable 3 is shaping up to be quite an epic adventure.  Even though the game is going to get away from a lot of the RPG elements and focus on Kingdom building and management, we're assured it won't turn into an RTS.  I'm sure we'll get more info in the coming months, and you can be sure we'll be here to bring it to you.  For now check out the first developer diary and the first batch of screenshots.