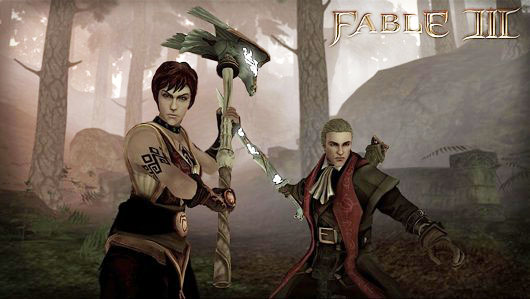 In recent weeks Fable III has cut their Kinect mini-games. Eurogamer has the scoop on what you're missing out on while Joystiq takes a look at business from a co-op standpoint. Think of this as bad news followed by good news - well, if you cared about the Kinect content that is.

The Kinect content for Fable III was supposed to come in the form of mini-games. The games, similar to some of the side-quests from previous Fable titles, had quirky little to-do's like statue sculpting and fruit throwing for a bit more fun. This content at this time has been removed from the game. It sounds like it just wasn't where they wanted it at this point, but that doesn't mean there won't be more content in the form of optional DLC later.

So Kinect fans, don't worry too much, it could still make an appearance at a later date.

From the vault of Fable II comes the economy game, now with a co-op option and a bit more substance. For Fable II once a player could afford property, they rented houses out and earned money while offline. Now the Lionhead team has decided the economy needs to really "matter" to the game, so it won't be quite so easy.

Your co-op buddy can join the game now with their own weapons, characters, and their gold.

You play as your hero with your weapons and -- here's the important part -- your gold. You can marry a co-op partner or become business partners and, as would be expected, your gold also becomes their gold, and the requirement for a more meaningful economic experience becomes clear

We wanted the economy to matter in co-op so we added these two features that allow you to get married and allow you to be business partners. One of the side effects of those two ideas is that if the economy is totally broken, then one of the benefits of getting married or being business partners -- that you get to share your gold -- is gone. The goal is for it to feel like you need to put more time into it if you want to amass that kind of fortune. It isn't just an easy decision. You need to think about each property; you need to think about whether or not you've put the right furniture in it.

Earning money and continuing to earn money means a bit more participation on behalf of the player. You'll have to decide how to spend your money wisely, which properties to upkeep, and do so with your business partner in mind. There is a fun perk though - you have  a butler to watch over your properties so it's not quite so much micromanaging.