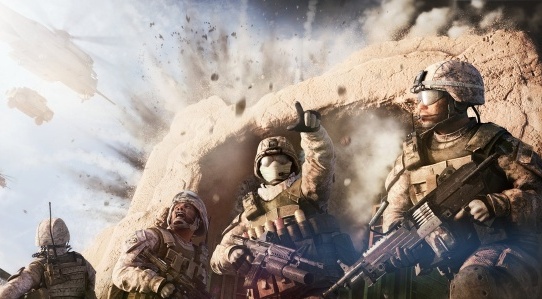 The above image is not a screenshot. It's a promotional image, and it's a bit disingenuous. While Operation Flashpoint: Red River is sure to be very eye-catching and realistic...harrowing action and close calls like the one pictured are not a series trademark. Not by a long shot.

Nonetheless, we thoroughly enjoyed Operation Flashpoint: Dragon Rising for its unique angle on warfare, and we have high hopes for this sequel. When we brought you news of its existence a couple of weeks ago, little was known about the title; today a first-look preview has emerged, and we're already strapped and prepared for the tedium of simulated combat.

To begin: it's easy to get the stories muddled in Operation Flashpoint. Essentially the campaigns play out like you'd expect - take this canyon, rescue this hostage, call in this airstrike, and get the heck out of the strike zone. Red River is reportedly going to change up the formula a little bit by first using other first-person shooter games (like Call of Duty: Modern Warfare 2 and Battlefield: Bad Company 2) as inspirations for certain locales, and then graduating the player into the harsher and less stimulating locations that Operation Flashpoint's story normally operates within.

Along with Modern Warfare and Bad Company, Codemasters also admitted to being influenced by a less likely shooter game: Left 4 Dead.

"The best thing about [Red River] is something that we don't actually put in it: it's four friends working together, deciding on this strategy or that strategy. That's what it's all about."

That's Codemasters' Sion Lenton explaining why versus multiplayer isn't as much of a focus as it was in the past. In fact, all competitive modes have been left completely out. The Left 4 Dead titles created a credible co-op niche for gamers and developers alike, and rightly so. Apparently even the most hardcore games can use a dose of Valve's runaway hit game - a dose that thankfully doesn't generically include zombies.

"We were just talking about trying to make the game more fun."

That's the door, and co-op is the key. I already like this game; if it flops miserably, it will not have done so for lack of effort.

In addition to making co-op the sole multiplayer mode for Red River, Codemasters is mixing in soldier classes, a persistent experience system, and some new features (such as assisted aiming) that will crank down the learning curve for unsure players. It sounds like they're committed to maintaining the core gameplay while being true to what gamers enjoy most: FUN.