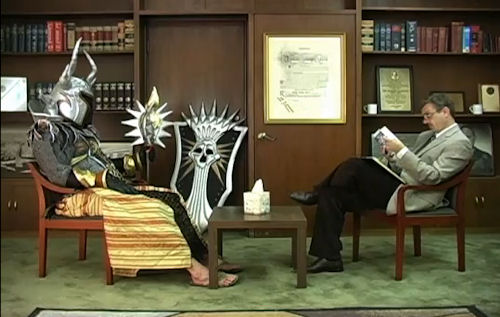 Last time we saw the #2 bad guy in Antaloor, a Mr. Sordahon, he was having some problems with a nagging boss and a friend who wasn't exactly pleased with his complimentary copy of Two Worlds.  Trying his hand at other professions, like kindergarten, it seemed like Sordahon was doomed.  Apparently depression set in because the latest promo video for Two Worlds 2 has our helmet wearing friend at the psychiatrists office - just don't discuss his mother.

In other Two Worlds news, GoG is running a promotion right now where you can get the original Two Worlds on PC for only $7.  Included in that is the world map, hi res wallpapers, avatar icons, and artwork.  Look, we know the first game isn't very good - but for $7 with 8 player co-op, it might just be worth it, if anything, to brush up on the sequel.  Who knows, maybe you'll bump into old Sordy there and can give him a job.

And here's the previous two in case you missed them.