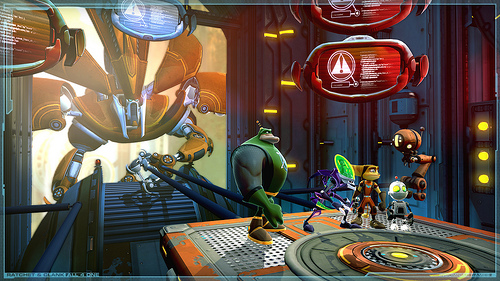 Full campaign, Drop-in/Drop-out 4 player co-op graces the duo Ratchet and Clank in the upcoming sequel Ratchet and Clank: All 4 One. Only, they’re now joined on the PS3 by two other heroes. Captain Quark and Dr. Nefarious will also be playable with up to four player co-op.

Today at the Sony’s Gamescom press conference in Germany, Ted Price of Insomniac took the stage to spill the beans on a new Ratchet & Clank title. He was then joined by onscreen versions of Captain Quark and Dr. Nefarious. The game is going to have four-player drop-in, drop-out co-op featuring the previously mentioned characters along with Ratchet & Clank.

You’ll be working together to solve the environmental puzzles of All 4 One, tossing one another across the screen and solving a world of co-op specific puzzles on the PS3. It also looks like the unveiling is really late in the development cycle, as another source states that Ratchet and Clank: All 4 One is out holiday season 2011.