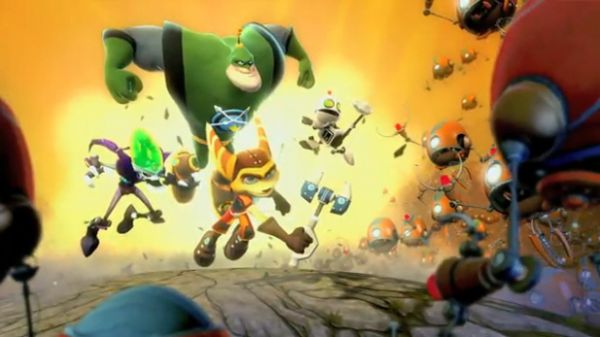 Hands down the biggest addition to the long-running Ratchet & Clank series is the inclusion of co-op for the first time in Ratchet & Clank: All 4 One. In a recent video interview, Playstationblog.com asks the development team about their shift to thinking in co-op. Shaun McCabe and James Gallagher discuss the decision to include co-op, some of the features and challenges in playing a single-player series with friends, and the competitive edge included in co-op to keep players on their toes.

At this point there are still some surprises in store for Ratchet & Clank: All 4 One, but the major shift to co-op is something PS3 owners are looking forward to. We’re really looking forward to details on the characters and story, but we’re happy to hear about all of the drop-in/drop-out details and competitive co-op decisions so far. Also, I call dibs on Dr. Nefarious - the glowy skeleton looking guy. He just seems to be my style, but we won't know that until the character abilities are revealed.