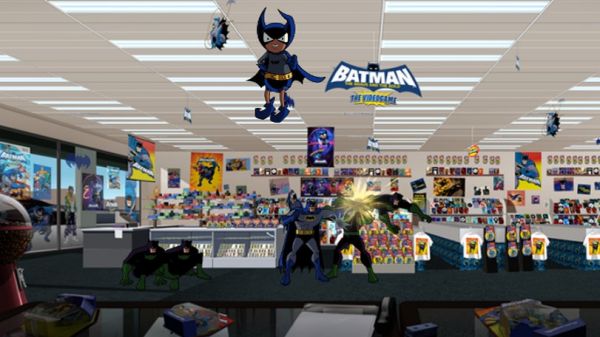 We've been watching the development of the Wii tie-in for the Batman: The Brave and the Bold very closely.  As an old comic book fan, with a young comic book fan or two at home, a two player co-op brawler with Batman in it sounds fantastic.  The only thing that could be better?  More players in co-op, of course!  And it looks like that just may happen when the DS and Wii versions of the game communicate with each other.

We've known for some time that Bat-mite, an magical, impish fanboy of the Caped Crusader from the fifth dimension, would be an unlockable character.  As you can see from the screenshot above, it would appear that Bat-mite is more than that, as he appears on screen with Robin and Batman simultaneously, dropping an anvil on Gorilla Grodd.  Could it be a 3rd player mode of some sort, with Batmite controlled using the DS?  It sure looks like it.  We'll let you know when more details are available.