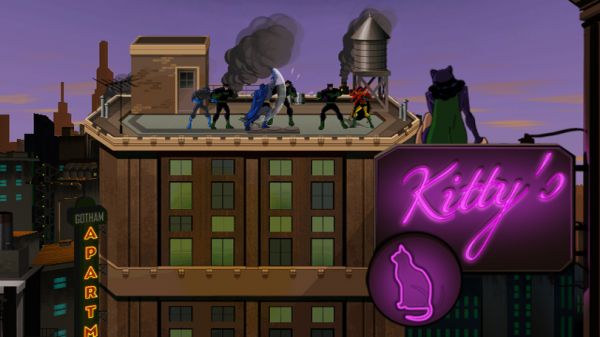 One of the surprise games of E3 for me was a beat em up title for the Wii called Batman: The Brave and the Bold.  Based on the cartoon of the same name, players take control of Batman or Robin through various levels taking on thugs and villains all to a gritty and over the top art style.

My hands on time with the game was using the Wii-mote and Nunchuk for control - I was Batman (naturally) and my partner was Robin (naturally).  Each character has their own unique tools, gadgets and moves they can execute.  Batman has all the equipment you'd expect, including items like the Baterang which can be aimed at multiple enemies with the Wii-mote and fired.

The combat itself feels REALLY good, with plenty of visceral feedback to your punches and kicks giving it an almost fighting game like feel.  There's some minor platforming elements mixed in with the action as well, but for the most part we just beat the snot out of every silly henchman that stood in our way.

Overtime you'll build up a special meter to unleash a powerful attack to devastate enemies further.  When launching the attack the game cuts to some really nice looking full screen animation.  Overall the game seems to have some really high production values.

The game will feature drop-in and drop-out play on the Wii, but sadly, the DS version won't have any co-op.  If you do happen to own both versions of the game - which we were told are completely different  - you can unlock additional content on the Wii version.

Batman: The Brave and the Bold hits the Nintendo Wii this Fall.