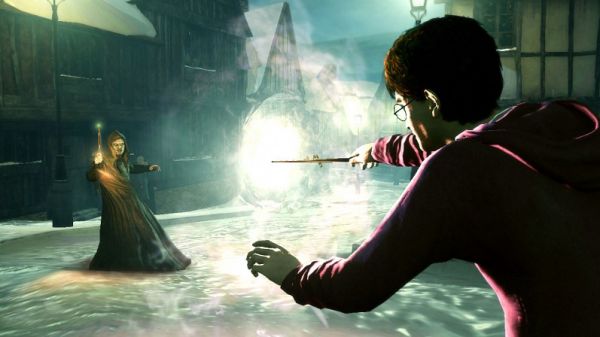 Harry Potter has been in the movies for a decade, and that means the video game tie-ins go all the way back to the previous generation of consoles.  One might think that a property featuring a trio of teen wizards would be a co-op lover's dream, but that hasn't really been the case (with one exception).  Later this year, co-op returns to the series in Harry Potter and the Deathly Hallows Part One (The Video Game).

During EA's Gamescom presentation this week, the Xbox 360 version of the game, which supports Kinect, was showcased.  The Weasley twins from the films made an appearance and took the motion controls out for a spin.  (If you thought watching someone waving a Wii-mote around was a bit strange, wait until you see these two!)  As far as gameplay goes, the Kinect sections looked almost exactly like an on the rails lightgun shooter, minus, of course, the lightgun.  I'm of two minds about this; on one hand, it could be the best thing since a lucky potion; on the other, it could turn ugly very quickly.  Either way, it's definitely worth a look.