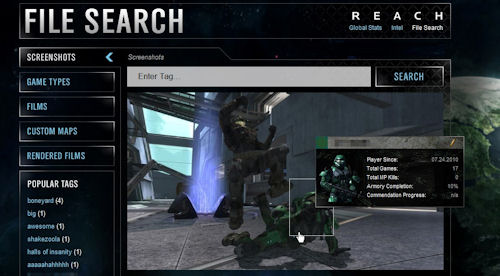 Bungie's web prescence with their Halo titles have always been a step above the competition.  When Halo 2 launched detailed matchmaking stats and history available online within minutes of your match completion it set a new precident for console games.  Many years later Bungie is about to unleash it's 3rd major iteration of the website for Halo Reach and as usual - it's loaded with some slick new features.

Perhaps the coolest new feature is a Facebook style auto tagging option for screenshots that are uploaded.  The game is capable of knowing just who is in a particular screenshot and it will tag their mug with a box and some information with their gamertag automagically.

For co-op fans there's full detailed campaign information as well as Firefight information available via the web.  You'll be able to see things like time played, who you played with, the number and type of enemies killed, and any screenshots or videos related to that play session.

Also on the website you'll find daily and weekly challenges - and a way to track your progress towards each of these.  There's also going to much improved methods of finding media like screenshots and videos thanks to a detailed tagging system as well as the previously mentioned Facebook style auto-tags.

All of this stuff will launch when reach launched on September 14th.  There's more details on the new website over at IGN.