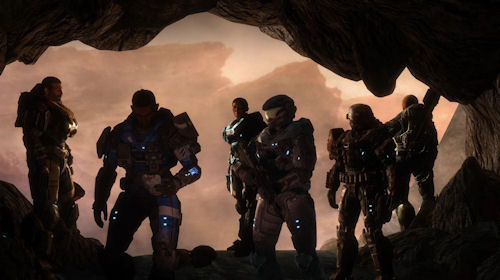 I won't tease you.  Here's the news, hard and fast.  Halo: Reach co-op campaign matchmaking will go live in October.

The first matchmaking update for Reach will occur in early October and consist primarily of fixes for bugs and balance issues. We're not done testing them all yet, but when they're ready we'll fill you in on all of the little details. We'll also be adding some game types and Forge maps. Co-op campaign will be going live in October as well.

Good.  I want to get through Legendary and the only way I see that happening is by tagging along with three superior players and not sucking enough to get kicked.

The reason for the delay is to avoid spoilers.  This will keep people who haven't yet beaten the campaign from having the game ruined for them by seeing later plot missions, such as "Chapter 23, the Return of Master Chief 2: Spartan Boogaloo,"  Don't worry.  I didn't spoil anything for you.  No matter how good you are, you will never get to Chapter 23, and don't even get me started on Act 47.

I guess launching co-op campaign matchmaking in October is Bungie's way of saying: "If you haven't beaten the game yet...

You're...a baby who sucks at Halo.

This quote, while being from the same source page, is taken completely out of context.  It is actually referring to gamers who have manipulated the Firefight customization tools to earn easy achievements.  Such games types, if one were so inclined, are available for download.

These game types have esoteric names like "1,000,000 points in 10 minutes!"  Ten minutes?  It took me--I mean my friend--almost 16 minutes to get up to 1,000,000 points.  Oh well.  I guess I'm just a baby who sucks at Halo, but so is everybody else because that's the top overall downloadable game type as of this writing. You heard me; most of us are babys who suck at Halo.