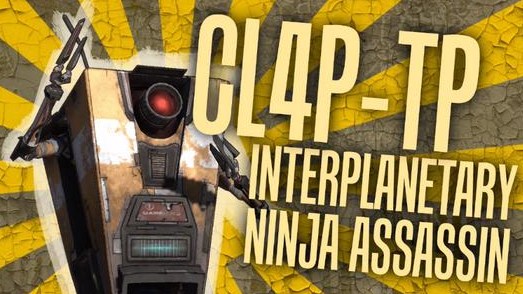 Borderlands latest DLC has been dated.  Claptrap's New Robot Revolution will be hitting the digital download playground on September 28th.  This will be the fourth Borderlands DLC.  A free patch will also be raising the level cap to 69 (stay classy, Gearbox).

The plot revolves around watching even bigger numbers jumping out of your targets' bodies as you pummel them with even better guns than the last time.  Which is fantastic, until some fool uses an artillery-chaingun-pistol with corro-electro-plosive-hellfire he duped from a guy who used WillowTree and nerfs your whole game. Claptrap's New Robot Revolution will be available for $10.00 on the PSN and PC, and 800 MSP on the 360.

For those of you who like your DLC in bulk form there is also a Game Of the Year edition due out October 12.  This bundle will feature all four DLC's for the low low price of $49.99 on the PC and $59.99 on Xbox 360 and the PlayStation 3.

This is an odd choice.  With an already saturated co-op market, and by that I mean Dead Rising 2, new Red Dead Redemption DLC, Halo frickin' Reach, plus a score of other holiday titles, it will be hard enough to gain a share of the holiday sales, but to release new DLC and then bundle it three weeks later seems like cannibalizing your own product.  Or shooting yourself in the head. Look at all that DLC!

I will most likely be getting both versions, because I have some sort of disability that compels me to buy anything having to do with Borderlands.  I call it 'The Clap'. I don't want to wait three weeks for the DLC, and I want the map that comes with the GOTY edition, which is purported to be "awesome."  And we all know that 'awesome' is an epic word that is not just casually thrown around on the internets.

So let us know.  Are you going to download Claptrap's New Robot Revolution or are you going to wait for the GOTY edition?  Or do you have 'The Clap,' like me?