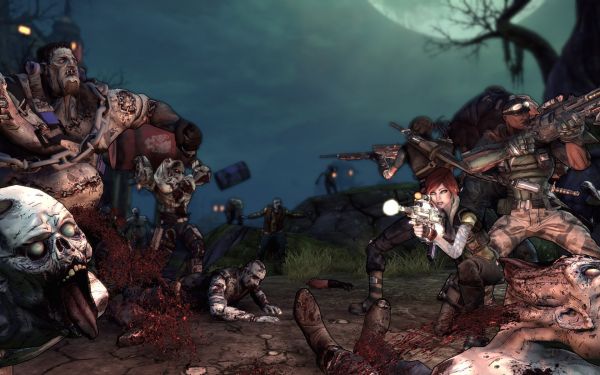 Left 4 who?  Resident 5 what?  Pa-shaw!  I bring you the latest screens of the first DLC of Borderlands, titled the Zombie Island of Dr. Ned.  Fear the giant Frankenstein like creatures, look in horror as hordes of undead midgets attempt to eat your brains.

Then shoot them in the face with a shotgun that does electrical damage and has a scope.

In case you missed it, the DLC hit this Tuesday, November 24th on the XBox 360 and PlayStation 3 and will set you back $10.  The size of the content is said to be about the size of the Arid Badlands (the starting zone) along with one or two of the other side zones included.

There's almost 50 quests at your disposal which should take co-op gamers about 4-6 hours to complete.  All enemies in the zone will scale appropriately, so there will always be a nice challenge.  Oh, and that Frankenstein looking thing?  He's called a loot goon.  He has a giant treasure chest on his back and upon killing him, well, the loot is now yours.

If there's one downside to the content, its that we won't see any new weapon options.  Not that it matters, I'm still trying to find all 4 million weapons - sadly I lost count a few times and had to start over.