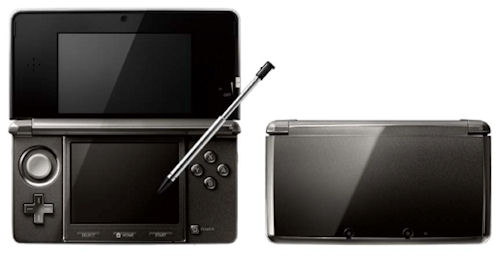 At a press conference today, Nintendo has revealed the final design, specs, and details of their upcoming 3D capable handheld - the Nintendo 3DS.  The device is set to launch in Japan on February 26th, 2011 for a price of 25,000 Yen.  Putting that through the standard conversion rate - that's about $300 - more than the Nintendo Wii currently sells for.   The system will launch in Europe and North America in March, but no official pricing has been set.

The hardware will have backlit face buttons, a home button that brings up a guide like interface, a retractable metal stylus, an analog stick, a charging cradle, two cameras (front and back facing) and like its predecessors, a clamshell design.  The OS itself will come loaded with several apps, including one for creating your Mii from a picture of yourself.  Finally it's been revealed the system will have a Virtual Console for existing Gameboy and Gameboy Advanced titles.

Perhaps the most promising feature for the system is its full standby mode - called "tag mode" -  which could be used to find other gamers to play.  So far only Street Fighter IV has shown how this could be used to play with other gamers, even if your 3DS isn't actively turned on.  Simply passing by another 3DS while walking down the street could, in theory, add a co-op partner to your game or send a versus challenge..  Check out this video to see a bit of it in action.

At almost $300 for a handheld system - will you still buy the Nintendo 3DS?