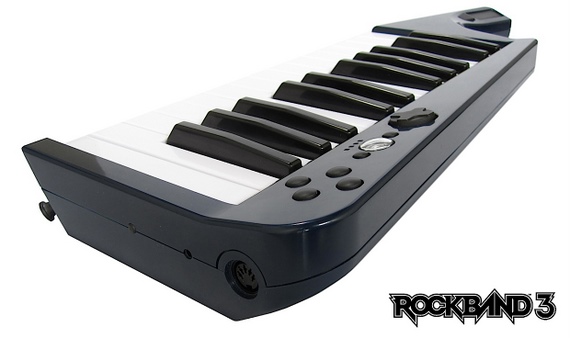 Bad news, everyone!   By bad news I mean that Harmonix has announced that the Rock Band 3 Keyboard bundle will not be available in the U.S., Canada, or Mexico, and by everyone I mean North American PlayStation 3 owners.  In an official statement  the developer says the PS3 SKU will "not be available...due to the agreement terms for the region."  Read on for the full statement.

You may have seen that retailers have taken down the Rock Band 3 keyboard/software bundle pre-orders for PlayStation 3. Unfortunately, this SKU will not be available in the U.S. (including Canada and Mexico) due to the agreement terms for the region. However, Mad Catz and MTV Games are working with those retailers that accepted pre-orders to enable them, if they choose, to honor those pre-orders placed prior to this change as soft bundles (separate discs and keyboards), at pre-order pricing. These retailers will have more details shortly.

· Moving forward, the keyboard and Rock Band 3 software will continue to be available as stand-alone products for PlayStation 3 in the US.

· This does not affect European customers as the Rock Band 3 keyboard/software PS3 bundles will still be available in Europe.

· The Xbox 360 and Nintendo Wii keyboard/software bundles are still available for pre-order.

If you've already pre-order Rock Band 3 for the PS3, you may want to check with your retailer to see what steps they are taking to fill your order.  The individual disks are going for $59.99, while the keyboards are $79.99 individually.  That's a total of $139.98. The bundles for each system are priced at $129.99.  So you are looking at $9.99 in savings with the bundle.  Don't let let the man stick it to ya!  Save that frickin' ten bucks! It appears that nothing has changed for Xbox 360 and Wii owners.  For PS3 owners it seems like everything will still be available, it just won't be in one convenient package.  And nothing says convenient package like a keyboard crossbred with a guitar.  It's a keytar!  Or a guiboard?  You will be able to fulfill your dream of being the band member who gets no action (the guiboardist) when the Rock Band 3 bundle releases October 31 for Xbox 360, and Wii; and in little itty-bitty pieces for the PS3.