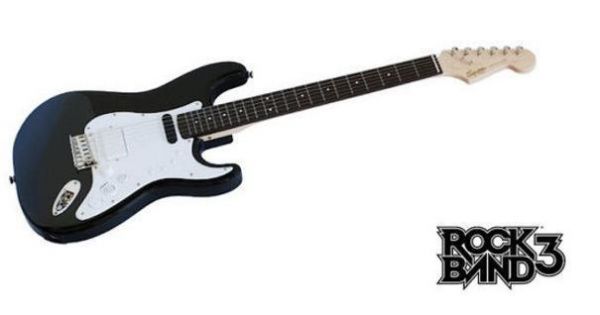 The guitar was so lonely that it gently wept

There is an ever decreasing number of people picking up the latest rhythm action games.  Same old, same old, is probably the reason for this.  However, despite being similar to its predecessors we at Co-Optimus still rated Rock Band 3 as an excellent co-op game, giving it an epic 4.5 out of 5.  For those people still pondering a purchase perhaps the announcement of a real Fender Guitar peripheral will push you over the edge?

'The Squier' by Fender is an actual guitar that can be plugged into an amp for real rocking, or into your console for some Rock Band action.  Fender have just announced on their website that the 6 string behemoth costs $279.99 and will be available to preorder from the 1st January, for a March 1st release.  A European release date has not yet been announced, but we would be more interested in a plastic George Formby style Ukulele anyway.

The instrument works in conjunction with Rock Band's Pro Mode and can actually help people to learn the guitar.  With a little help from a Mad Catz Midi Pro Adapter you should be able to plug the electric guitar into the Playstation 3 and Wii, as well as its native Xbox 360.  Still don't believe that a electric guitar can be used as an instrument and a peripheral?  Well, check out the video on the Fender website to see for yourself.