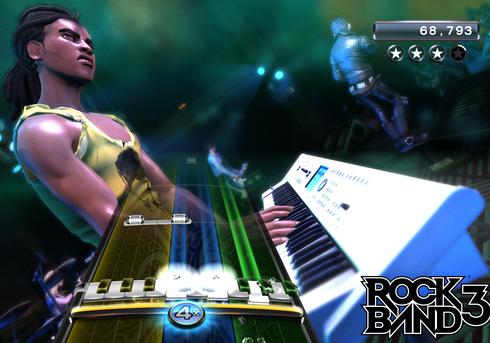 As Rock Band 3's late October release approaches, more and more details about the game are coming to light.  The keyboard instrument, new to the series, is perhaps the most intriguing.  A new trailer has been released, and a good bit of actual keyboard gameplay is shown off.  From the video, we see that on easy and medium difficulty, the note track looks very much like a guitar track, but on hard and expert, the track changes to look like that of the picture above.  While the lower two difficulty levels will only have a 10 note range, the tougher versions will require players to shift up and down the ivories often, more directly mimicing an actual keyboard playing experience.

Confirmation has also been given that all of the music from Rock Band 2 will be exportable into Rock Band 3, just as the first Rock Band's music was into its sequel.  No price has been provided for this export, and while all consoles will have exporting available, the exact details of which songs will be exported are still up in the air.  Last of all, Harmonix has stated that "Pro Mode" DLC will likely be more expensive than regular DLC.  No further details were given, but standard DLC will remain priced at $2.