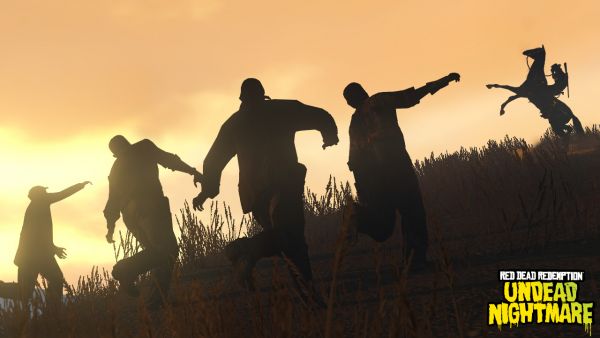 Rockstar Games have announced the official release date for the next set of DLC for Red Dead Redemption.  Undead Nightmare, a single and multiplayer piece of content that adds a zombie storyline to the game, will be released on October 26th for the price of $10 or 800

The story has the world of Red Dead Redemption ravaged by a virus which unleashes zombies on everyone and everything - even the animals.  It's up to John Marsten to ride through the shambling creatures and find a cure.  According to the press release there will be all new dynamic missions around saving citizens from the undead.

All that sounds good, but what about the co-op?

There's a new co-op mode called Undead Overrun, a survival mode where waves of infected attack and "players must work together to stay alive against increasingly difficult odds."  We've heard that line before in many other games, and for the most part, it's always been incredibly entertaining.  According to Kotaku it's for two to four players.

If this content looks good to you and you don't have Red Dead Redemption  - soon you won't need it.  Undead Nightmare as well as the previous DLC packs will be available on a stand alone disc for $30.

...a single, stand-alone disc that bundles together for the first time ever, the Undead Nightmare Pack, the Outlaws to the End Co-Op Mission Pack, the Legends and Killers Pack, the Liars and Cheats Pack and all the Multiplayer Free Roam modes released to date.  Undead Nightmare will be available at retail stores everywhere for $29.99/£24.99/€29.99 and does not require a copy of Red Dead Redemption to play.

Sounds like a pretty sweet deal if you only care about the co-op!