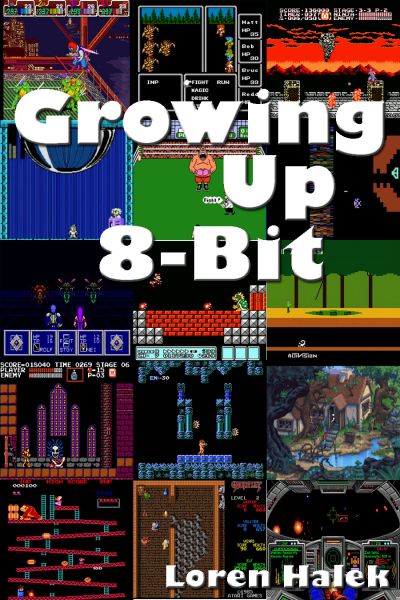 Nick (bapenguin) has been nice enough to let me promote the ebook I published close to 2 months ago called Growing Up 8-Bit.  The book is available for download from Amazon as well as Barnes and Noble for $2.99.  You do not need a Kindle or Nook to read the book, both sites have clients available for a variety of computing and mobile platforms.  There is also an 8-page PDF sample I have put online for people to look at. It contains the early pages of the book after the Table of Contents.

It covers all my notable experiences with gaming, events (like the 1990 Nintendo World Championships) and personal stories surrounding them from my birth in 1976 to the end of 1990.  I feel I bring a unique perspective given my handicap that many of you may not know about: I was born without a left eye and have lived my life being able to see out of only one eye.  I've adapted better than those that lose sight in one eye later in life and am able to do everything a normal person can do.  My handicap doesn't come into effect much in this book, but it will in the later ones as games move from 2D to more 3D effects (not necessarily the 3D of today with movies and TV, but more like Super Mario 64 3D gameplay).

The book is split by system, games and events (over 100 in total) so one can easily traverse it via Table of Content links if they want.  This will hopefully turn into at least a 3-part series with the next book covering 1991-2000 and the other book covering 2001-2010.  Both of those books will likely contain more games and be longer than this one.  I already have roughly a fifth of the second book done, just finishing a major part related to a personal story.

Below is the section on Contra (NES), one of very few co-op games I talk about in the book.  I had friends when I was younger, but many of them lived a ways away and I spent most of my time playing alone.  This will hopefully give you a feel of how the book is written and it is easily the longest section of any co-op game in the book.  Contra received one of my "Gaming Milestone" titles as I feel it truly was a milestone in gaming.

Konami’s on a hot streak here and they wouldn’t back down with the release of Contra, the de facto classic 2D shooting game (with pseudo 3D sections as well).  You, and another player if you want, take on Red Falcon Rambo style through a number of levels.  Much like Double Dragon, this came out in the arcade first although I don’t think it was nearly as popular there as it was on the NES.  The game was all about pattern recognition, especially if you wanted to make it through the game on your 3 lives and minimal continues without using the famous Konami cheat code (up, up, down, down, left, right, left, right, B, A, start) that gave you 30 lives.  I was unable to beat the game with the 3 lives and limited continues, but I know many of you reading this probably were able to make it through without using the code.

The characters were named Bill and Lance and they were sent to stop the invading alien force of the Red Falcon.  You basically shot anything you could see as well as avoid any enemy shots hitting and killing you with the one shot death.  Along with the regular gun there were other power-ups: spread gun (the best), laser, fireball and machine gun.  Each was represented by a capsule with a falcon on it and a letter (S, L, F and M).  You would go through each 2D stage and beat the boss at the end of it, usually as part of a large building.  Once into the building the game would switch to a pseudo 3D shooter where you would jump, stand or go prone and shoot at key points to destroy the wall blocking your progress and continue on to the end where you would face off against another boss and finally beat the level.

This is probably one of the most enjoyable games to come out around this time.  If you had a friend or sibling you absolutely had to play it co-op, although Europe and I think some other countries got screwed out of co-op for some reason.  I still play this game from time to time, but I still have been unable to beat the game with the base lives/continues given.  One of these days maybe I’ll do it.  Without the code this game is probably at the top of the difficulty bar, higher than the previously talked about Mega Man and Ghosts ‘n Goblins.

Thanks for reading and hopefully you're interested in reading the rest of Growing Up 8-Bit, available at Amazon as well as Barnes and Noble.  Any reviews on either site are welcome to get more notice out there.  Thanks again to Nick for allowing me to post this.  Enjoy the book and hopefully I can continue on with the next one.